Who is the Anguissola? Sofonisba Anguissola (1532-1625) was born in Cremona, about 80 km southeast of Milan as the oldest child of Amilcare Anguissola and Bianca Ponzone, who belonged to the minor nobility. Inspired by Baldassare Castiglione’s advice on the education of women in his Il Cortegiano of 1528, her parents ensured that Sofonisba, her brother, and five sisters all received a solid education and had the opportunity to further develop their talents. While one of her sisters, Minerva, and her brother Asdrubale pursued other artistic interests, Sofonisba and her four other sisters studied painting.

In 1558, her reputation had risen to the level that the influential art patron the Duke of Alba recommended her to the Spanish king, Philip II. He invited her to Madrid to become the lady-in-waiting to his wife, Queen Elisabeth of Valois. She would stay in Madrid for 14 years and would paint numerous portraits for the Spanish court. At age 39, she would marry to a nobleman from Sicily, and they would move back to Italy. She never had children and enjoyed a long and prosperous career. 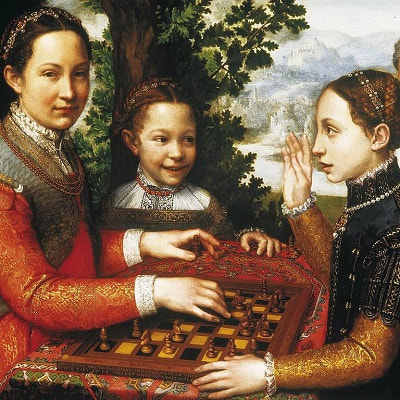