Who is Hokusai? Katsushika Hokusai was a prominent printmaker and painter of the Edo period. He was born in 1760 and died in 1849 after a long career of art making. When he was 19 years old, he studied under Katsukawa Shunsho who gave him the skills to begin producing his own unique artworks when he was 20. After a dispute with his teacher, Hokusai ended his studies and began making sketches for woodblock prints that would be turned into picture calendars alongside his own prints of portraits of women. Soon he became a major player in the ukiyo-e movement, competing with Hiroshige and creating illustrations and paintings for popular fiction books.

A practicing Buddhist, Hokusai paid special attention to nature, and he produced many landscape paintings and prints including Thirty-Six Views of Mt Fuji in which his unique style became more prominent. He also painted birds and flowers with bright, intense colors. Hokusai was careful to depict daily life without any exaggerations but with great beauty. Towards the end of his life, Hokusai grew weak in both his health and skill. Nonetheless, before his death at the age of 89, Hokusai created numerous works depicting mystical images such as demons and dragons, a change of pace from his typically style. 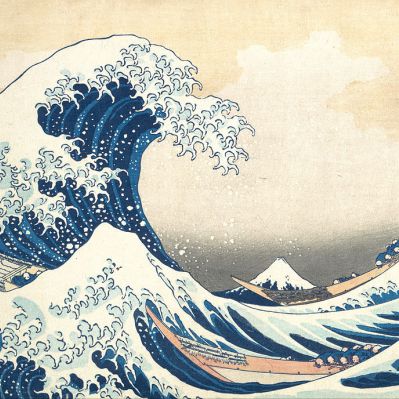